If you are looking to ‘improve’ your nose without literally going under the knife, then you should consider a nose thread lift. Here, you will learn more about this popular procedure, how it’s done, the downtime, including the nose thread lift cost.

What is a Nose Thread Lift?

A nose thread lift, also known as a “Lunchtime Nose Job” or “Weekend Nose Job”, can change the ‘look’ of the nose by improving the nasal height and septum (the partition that divides the two nostrils.)

This procedure makes use of fine, absorbable threads (similar to those used in surgeries) that are inserted along the nasal bridge and the bridge. The threads serve as ‘scaffolds’ that immediately lift the said parts.

Once the threads are inserted and absorbed, the nasal area goes into collagen production overdrive. This gives the firm, structured nasal shape that makes this nose job popular among many.

Who Should Get a Nose Thread Lift?

If you are not happy with the appearance of your nose, then this cosmetic procedure is perfect for you. It can help you achieve a better definition by slimming and reducing the width of the nasal bridge.

Those who will benefit the most from this procedure are people whose noses are:

While there is no risk of broadening the nose bridge with this procedure, it may not be as effective in removing a nasal hump. If this is your main concern, you are better off with a nose filler.

Benefits of Getting a Nose Thread Lift

A nose thread lift is done easily – usually in under an hour. Its results may not be permanent, but it can last for as long as 1 to 2 years.

There is also little downtime with a nose thread lift. This is in comparison to Rhinoplasty which takes 6 weeks to fully heal.

Another great thing about this procedure is that it’s relatively safe. With a nose thread lift, there is a slim chance of developing vascular complications that may lead to blindness, even stroke. These dangerous side effects are more common in the application of fillers.

To be 100% safe, pregnant women, as well as those who are taking blood-thinning medications, should shy away from this nose job. That is until they are given the go-signal by their physicians.

What’s great about this procedure is that it’s markedly cheaper compared to rhinoplasty or the traditional nose job. The nose thread lift cost ranges anywhere between $1,500 to $4,500, with the average price at about $2,400.

The procedure starts with the application of a numbing agent (anesthesia). After the medication settles in the area, your therapist will start inserting the specialized threads that will help shape, contour, or lift your nose.

The number of threads will vary according to the situation or the nasal style that you wish to achieve. Usually, 6-8 threads are used to modify the nasal bridge. An additional 3-8 pieces may be used to beautify the tip.

As for obvious cuts or incisions, you don’t need to worry about scarring because there won’t be any.

As for the pain, you need not worry. There is little to no discomfort since anesthesia is applied before the start of the procedure.

Immediately after the nose thread lift procedure, you can expect some redness, swelling, and some bruising at the injection areas. While this might be a little alarming, these side effects will subside after 1 to 2 days.

With that being said, there is little to no downtime with a weekend nose lift. After getting this procedure, you can resume your daily activities right away.

In case you wish to undergo a lunchtime nose job once again, you can have it repeated after 1 to 2 years.

There is a chance that the nasal bridge may look deviated to one side if the threads are improperly placed. It may end up infected as well. While these are uncommon, these are sure consequences if you seek the services of an inexperienced technician.

With that being said, a certified specialist should perform your nose thread lift – in a clinic with all the necessary equipment needed for the said procedure.

A nose thread lift is a quick, almost painless procedure that can give you the perfect nose that you have always wanted. This procedure may not be permanent, but it’s cheaper and relatively safer compared to most nose jobs. As such, it is a good option if you want to change your nose in a beautiful yet subtle way.

Previous Post: « Full Face Threading Pros Cons and Everything you Need to Consider
Next Post: Microblading for Men: Hairline and Brows on Fleek » 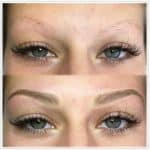 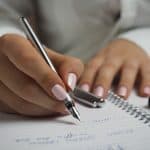